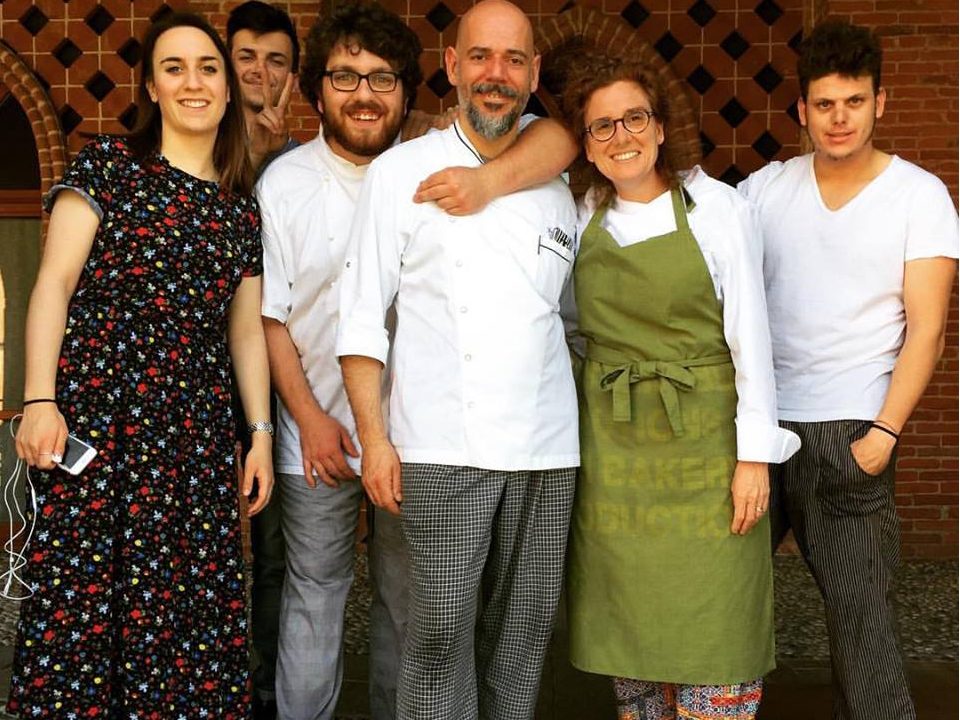 Barbara Abdeni Massaad was the special guest Chef at the Academic tables at Pollenzo. Writer, photographer, chef, and Slow Food International activist Barbara Abdeni Massaad has an inexhaustible passion for the gastronomic culture of the Levant, seasoned with a strong social commitment.Barbara prepared two menus for the week of May 22 to 25.

The first started with an orange lentil, carrot and cumin soup, followed by fatteh, made with crunchy Arabic bread, yogurt and eggplant, and concluding with a classic baklava with walnuts, pistachios and almonds.The second menu featured hummus with shawarma (grilled meat), tabbouleh (parsley, bulgur and tomato salad) and for dessert mohlabieh, a milky pudding flavored with orange-blossom water, The Academic Tables began in 2013. Carlo Petrini came up with the idea out of a desire to construct a different model for collective catering, one which would harmonize service needs with cultural possibilities and opportunities for meeting and understanding between all those involved. The Academic Tables is first and foremost the cafeteria for the students and employees of the University of Gastronomic Sciences, but it is also a space where different expressions of cuisine and gastronomy can be welcomed, allowing exchanges that enrich and create exciting stimuli. The biggest challenge of such a project is the need to ensure accessible prices without abandoning the elements of “good, clean and fair” quality. The dishes served must also satisfy the nutritional and sensory demands of a large number of students in a short timeframe. It is therefore necessary to balance a “slow” gastronomic experience with the speed and versatility of a lunch break for the same group of users every day. Lastly, the wonderful human biodiversity that is one of the university’s assets demands daily attention to everyone’s specific needs, taking into consideration widely differing diets and eating habits.

Here is what some of the students had to say about the menu:Barbara Abdeni Massaad was the special guest Chef at the Academic tables this week. She brought a much needed flair of spices, herbs, and citrus flavors to my palate. As students we have the ability to speak with her at the end of her visit. She has written numerous cookbooks which I am eager to review including Soup for Syria, in which she donated all of the proceeds to help Syrian refugees. Barbara spoke of Lebanon and witnessing war-torn Syrian camps in her country. The book Soup for Syria was aimed at putting a face to people no different from us and connecting our common humanity through food. She spoke of compassion, passion, conviction, love, and determination. Food pictured: Carrot Cumin Soup, Fatteh, Baklava, Shawarma Hummus, Tabbouleh, and Mohlabieh. Laura DeOliveira

Is Lebanese Hummus the Yummiest? Nobody can answer, but it’s sure that they have a secret in cooking (and eating) that: Mezze, the Lebanese Cultural Ambassador. Social, Casual, Colorful and Joyful they are the Lebanese way to nourish body and soul. Cooking is a personal thing, never about a strict set of rules, that’s why Barbara Abdeni Massaad served us Hummus with Shawarma today, for a vibrant, street style and young mix in her Lebanese way. She added a pinch of love to mix with serenity and finally peace of mind, back toward simplicity. Sahtein! Greta Contardo

Thank you @barbaramassaad for this delicious preparation of fatteh. Your recipes make me fall more, and more, and more in love with Lebanese food. Chetna Chopra